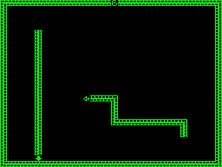 It's 1976.  The hottest arcade game on the market is Blockade (or Blokade), an 8-bit maze game for 2 players.  You and your opponent must move your characters around the screen in 90-degree angles, leaving a solid line behind them.  Whoever runs into one of the solid lines first, loses.  But soon you'll be able to play this fascinating game from the comfort of your own home—

It's referred to as the Snake Game, and it has many names and platforms.  It was an instant classic on the arcade circuit.  And it's even more popular now, thanks to cell phones and online gaming platforms like Facebook and YouTube (yes... YouTube).   Its simplicity makes it accessible to everyone, yet it's complicated maze-like structure makes it challenging.

Every Snake game runs by the same principles as Blockade.  The player controls a long, thin creature, resembling a snake, or a character that leaves a snakelike line behind them.  The character roams around the bordered plane on the screen, picking up foods (or other items).  It tries to avoid running into walls, other players or itself.  And every time a snake eats a piece of food, its tail grows longer, increasing the difficulty.  Plus, you can't stop.  The creature keeps moving.  There's no break in the action.  It's until you win... or until you die.

In 1977, Atari released the first home console Snake game, called Surround.  In 1978, Worm became the first Snake game to hit personal computers.  Then, a microcomputer port version in 1979 called Hustle.  Then came the colored version in 1989, simply called Snake, compatible on IBM computers with Color Graphics Adapter technology.  From there, it moved on to other gaming consoles, more advanced computers and eventually mobile phones.

The first Snake game to hit cell phones was, of course, called Snake.  It was available on monochrome phones by Nokia in 1997 and became an instant hit, with at least seven sequels following it as cell phone technology improved.

And then came the Internet.  And Gmail.  And YouTube.

The instructions have varied since its start on the video hosting site, but to access the Easter Egg Snake Game on YouTube now, it's fairly easy.

Simply go to YouTube and pick a video, any video, and play it. 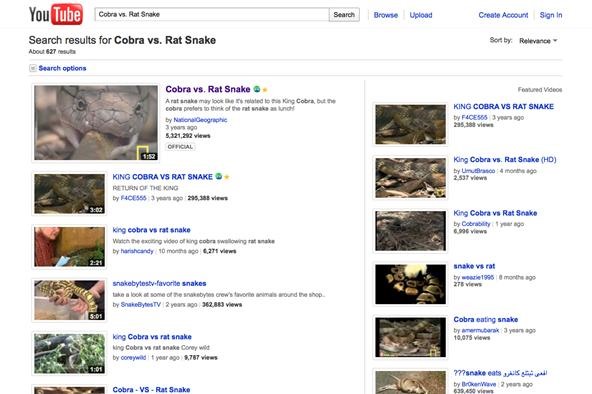 Make sure the video you selected is playing and IS selected.

This works while the video plays or is paused, but only if the video controls are activated.  Which means, if you click somewhere on the opened browser window while the video is playing, you won't be able to play Snake.  To be sure, click the PAUSE button (or PLAY, if you like the challenge of moving video behind your game).

There's actually a number of ways that I've found worked.

Firstly, after playing (or pausing) the video and have the video selected (see above), press the following keys on your computer's keyboard:

1. Press the LEFT key, holding for 2 seconds, then release and
2. Press UP

That's it.  You should now see the white dotted snake moving across the video screen.

Note: This also works if the video has completely loaded.

The other way to access the Snake game on YouTube videos is by making sure the circular load symbol is showing, then simply press the UP key.  You can do this by:

A. When you first open the video, hurry up and click on the video screen as it's loading.  Then press UP quickly.  Done. 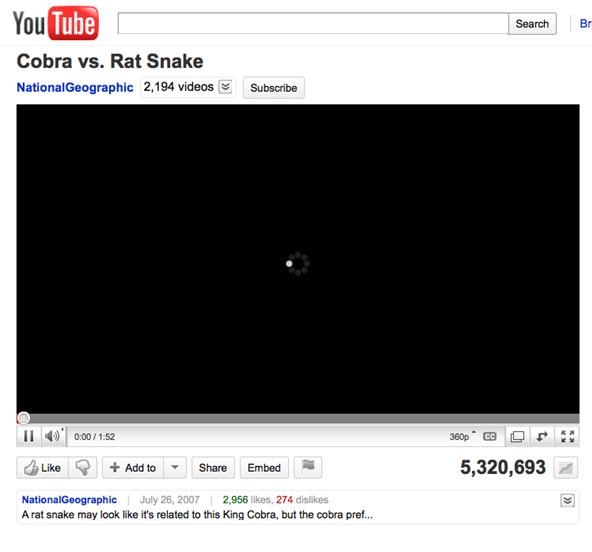 B. Move the playhead over to an unload part of the video.  When it moves, it will begin loading from that point on.  When the circle loading sign is on, hurry up and press UP. 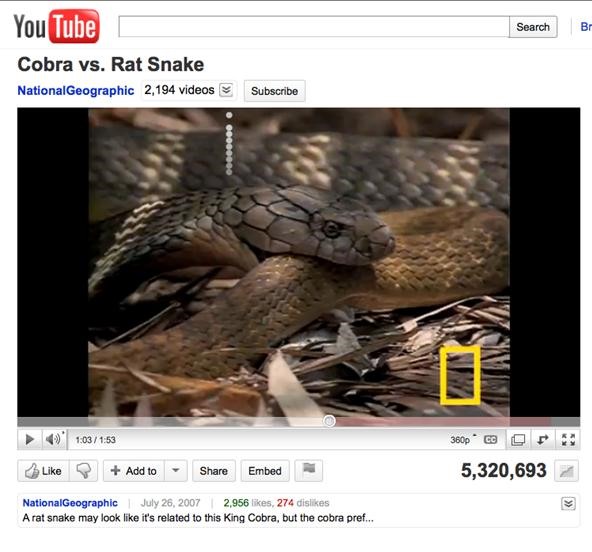 Playing is simple.  Just use the arrow keys to control the snake and get it to eat the white circles of food.  Just like most Snake games.  If you run of the video screen, the game ends.  If you hit yourself, the game ends.  How long can you last? 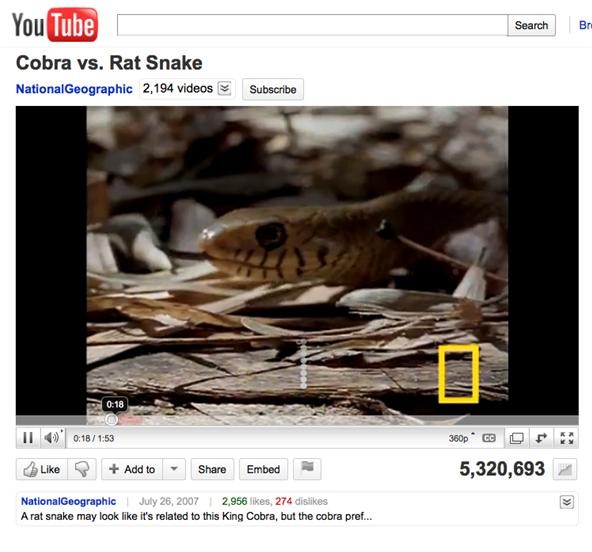 Step 2 The Snake Game on Gmail

To play the game in Gmail, it's a little trickier.

You may be able to use keyboard shortcuts throughout your computer, but when it comes to Gmail, there's some specific ones that you'll have to enable through your account settings.

2. Click on Settings in the top right-hand corner, beside your gmail address.  This should take you directly to the General tab in Settings.

After clicking Save Changes, you should be redirected to your Inbox.  Now, you have to make sure the Snakes game is activated.

3. Scroll down and find Old Snakey by Dave C.  Make sure the Enabled is selected.  If not, select it.

4. Click Save Changes at the bottom (or top).  You should return to your Inbox.

Now, to play Old Snakey in Gmail, simply press the ampersand (&) key (meaning Shift + 7) on your keyboard on anywhere in Gmail.  Then just follow the onscreen directions.  Depending on your browser size, you may have a small or big game board. 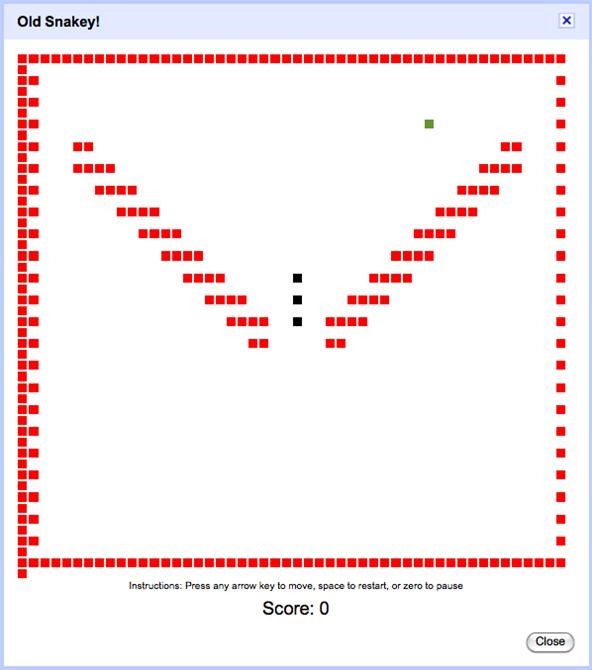 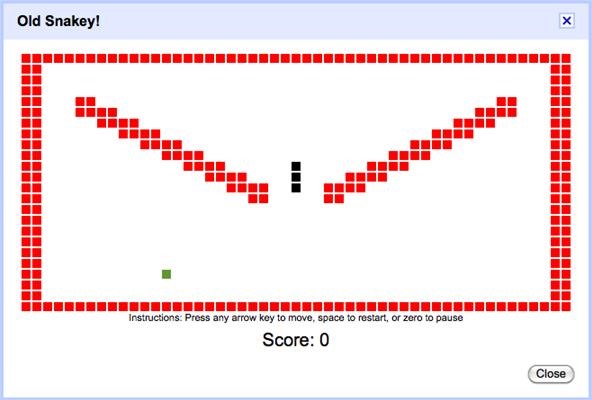 Note: This may not work if you have two different Gmail accounts open.

The Snake game on Facebook is much easier to find and activate than on YouTube or Gmail.  Actually, it's one of the simplest things you can do.  And you don't even need a Facebook account (unless you want to record your score).

Just click on the following link to play the MindJolt version of the game. 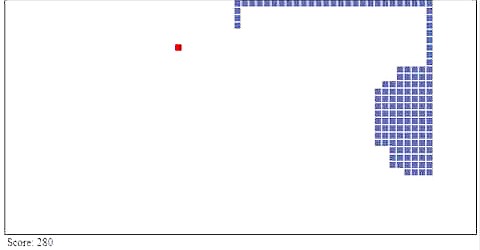 To start Snake, click the center of the game screen, and then press SPACE to start.  Control the snake with the arrow keys and grab the food without hitting yourself or the walls.

If you're interesting in learning some tricks to playing Snake of Facebook (or maybe even some hacks), check out the how-to videos on WonderHowTo.  And here's a few video demonstrations of it in action.

i love that game